It is with a great deal of sadness that I have to report that one of the gentlest of  souls, the wonderful pianist John Bunch, died yesterday in New York at the age of 88.

He may have been a good old age but it has still come as a bit of a shock to his many friends because he seemed so tenacious and so young at heart that it somehow seemed as if he would outlive us all.

During the publicity build-up to the recent release of Disney’s Alice in Wonderland, one tune kept running through my head: the title theme to the original Disney animation, which was written by Sammy Fain.

Never much of a fan of the 1951 Disney cartoon, I only really got to know this lovely number when I received a tape recording of it from my dad while I was a student spending a year in Paris. It was from an album entitled A Celebration of Sammy Fain – Are You Having Any Fun?, by a quintet co-led by tenor saxophonist Harry Allen and pianist Keith Ingham.

My regular parcels from home not only kept me up to date with dad’s latest CD purchases but also meant that I had plenty of options available to me musically on the long walk home each morning and night, and on the Metro – where the Sony Walkman was undoubtedly a girl’s best defence against unwelcome conversations.

The tape recording of the Harry Allen-Keith Ingham CD was one of the musical highlights of my year in Paris. It really is a glorious affair which not only showcases the marvellous playing of the band, but also the fact that Sammy Fain deserves to be a much-better known name than it is.

Alongside such well-known songs as Secret Love, You Brought a New Kind of Love To Me, When I Take My Sugar to Tea and I’ll Be Seeing You are several beautiful ballads, among them the afore-mentioned Alice in Wonderland and the theme tune for the 1961 movie Tender is the Night.

I’ve never heard another version of this song – and, given how exquisite this version is, I’ll never need to.  It’s the perfect evocation of a balmy, sultry, romantic night and one of the best examples of Allen’s skills as a balladeer.

Another highlight is the elegant solo feature by Keith Ingham on the similarly sumptuous ballad A Very Precious Love, and an uptempo take on That Old Feeling.

I must have worn my original tape out by the end of the year because among the various jazz discs I was given by my dad that December, for my 21st birthday,  was my own copy of the CD.

* The Harry Allen-Keith Ingham Quintet: A Celebration of Sammy Fain? – Are You Having Any Fun? (Audiophile ACD-261)

…Vocalist Annie Ross is performing at Ronnie Scott’s in London on May 5 & 6, along with her regular New York co-horts – Warren Vache (cornet) and Tardo Hammer (piano). All three will have been at the Norwich Jazz Party immediately before heading to Soho…

….John Bunch, that most elegant of American pianists, has been forced to pull out of the Norwich Jazz Party (May 1-4; www.norwichjazzparty.co.uk)  due to ill health. It won’t be the same without him, but we’ll be thinking of him …

….. Scots singer Carol Kidd and her long-time musical partner, the guitarist Nigel Clark, have recorded an album of … wait for it … duets, for Linn Records. Due out in the autumn. Can’t wait, especially since it includes their take on Moon River. Their duet of that ballad at the Johnny Mercer centenary show at last year’s Glasgow Jazz Festival was the highlight of the night, and left host Sir Michael Parkinson lost for words as it was so exquisite…

….. American cornet supremo Warren Vache has been in the recording studio with his friend and collaborator John Allred (trombone) for a new CD on the Arbors Records label. Top Shelf, due out later this year, boasts the same line-up as the live album they released last summer, and features an imaginative selection of bop tunes… 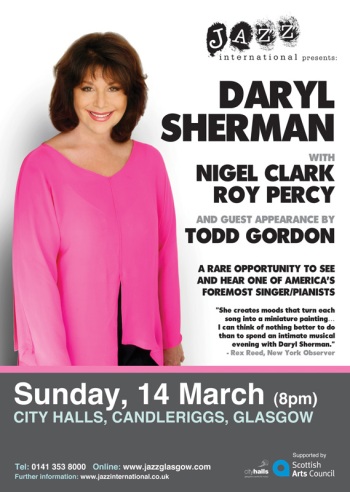 Daryl Sherman, the Manhattan-based singer and pianist who made her Glasgow debut in the City Halls Recital Room on Sunday, must have tripped back to her hotel a very happy lady. Why? Because she had the most enthusiastic response to her performance that I think I’ve seen at that venue.

Sherman has a girlish, Blossom Dearie-esque voice which is not every jazz fan’s cup of Earl Grey (it didn’t do anything for the aficionada sitting next to me – at least at the outset) , but she also has impeccable taste – which is a rare attribute these days.

Not only was her choice of material first-class but the atmosphere she created also distinguished her gig from most others. It was relaxed and fun, but there was no sense that the concert had been thrown together – as can often be the case when a visiting soloist throws his or her lot in with local musicians.

Mind you, Sherman had selected the ideal local musicians for her easygoing style and penchant for the less  well-thumbed pages of the Great American Songbook. She really couldn’t have asked for better accompaniment than she got from bassist Roy Percy and, especially, the great guitarist Nigel Clark – both of whom gamely, and stylishly, joined her on a string of songs which they had probably never had call to play before.

Flying Down to Rio (from the Astaire-Rogers movie of the same name), Getting To Know You (The King and I) and Jeepers Creepers (from Goin’ Places)  were all ensemble treats featuring Sherman’s vocal and pianistic talents.

On How Insensitive, she stepped into Carol Kidd’s shoes by duetting memorably with Nigel Clark. The results were sublime – Sherman’s vocals (which sounded deeper when she was singing in what I assume was Portuguese) and Clark’s sensitive guitar playing were a perfect match.

As were the vocal duets with guest artist Todd Gordon – playful versions of Fly Me to the Moon and Manhattan, both dished up with rarely-performed verses.

By the end of the night, Sherman had made herself more than a few new fans – and I think you could safely say she’ll be back.