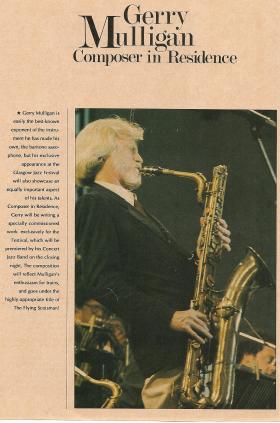 In July 1988, I had recently finished my Highers but I was still only in the third year of my jazz education. Aged 16, I had notched up a couple of Edinburgh Jazz Festivals and started to build a basic jazz record collection thanks to the excellent Giants of Jazz series.

What I hadn’t yet experienced was a full-blown, formal jazz concert in a proper hall – but that was about to change. The Glasgow Jazz Festival has always specialised in big, one-off concerts and it was at the festival of 1988 that I experienced my first – in the form of the Gerry Mulligan Concert Jazz Band at the Theatre Royal. To be honest, I’m not even sure I’d heard of Gerry Mulligan when my Dad – a master in the art of brainwashing (midnight feasts to celebrate Louis Armstrong’s birthday had been the first phase) – said he’d bought us tickets.

Hearing the sound of this terrific, 16-piece, outfit was electrifying and exhilarating and it made me an instrant fan of Mulligan’s eloquent and very

distinctive saxophone playing, composing and arranging. So much so that I waited at the stage door to get his autograph. Despite his reputation as a difficult customer, he obliged willingly – another reason for me to love him. The highlight of the evening for me was the utterly thrilling number he had penned for the jazz festival – The Flying Scotsman, a rollercoaster ride of a tune.

Many of the numbers the band played in Glasgow (scroll down for the list) were on their recent LP Walk on the Water, so in the weeks following the jazz festival, I got hooked on that album in particular while also discovering such other landmarks in Mulligan’s career as the Birth of the Cool album he made with Gil Evans and Miles Davis in the late 1940s, the piano-less quartet he pioneered with Chet Baker in the 1950s, the series of classic LPs which teamed him with such other notable saxophonists as Johnny Hodges, his tentet, the original incarnation of the Concert Jazz Band,

his film work – notably I Want to Live! (1958), which we’re showing at this year’s jazz festival – and his lovely 1960 album with his one-time lover, the movie actress Judy Holliday..

The Glasgow concert was recorded by the BBC to be broadcast on Radio 3 some months later. When it was, Dad and I were ready for it: we had tape recorders set up all over the house so that we could have back-up copies of the recording, and they were all started at different times so there was no chance of us losing a bit of a number as we turned over a tape when one side ran out.

The recording confirmed all my initial feelings about the concert, and I’ve been playing my favourite copy of it (the one which left in all Mulligan’s announcements) ever since. It came to Paris with me in 1991, when I went to work there for a year (a year which culminated in my seeing Gerry Mulligan 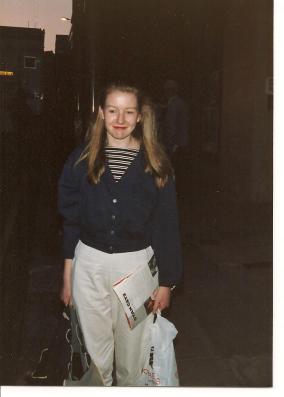 with the Re-Birth of the Cool Band at La Villette), and it came to Edinburgh with me, in 1994, when I did a brief post-grad course.

While the next Glasgow Jazz Festival concert I attended – Stan Getz’s, in 1989 – was released on a CD, by Concord, the Mulligan one has never materialised in this form, and The Flying Scotsman was only subsequently performed by Mulligan (who died in 1996) in a quartet setting. (This will be recitified by the
Classic Jazz Orchestra plus Alan Barnes on June 29, at this year’s festival.)

Frankly, Getz’s concert made nothing like the impression on me that Gerry Mulligan’s did. In fact, all I remember is the fact that I – along with everyone else – failed to get an autograph: he resolutely refused to oblige the many fans who waited for him at the stage door. Dad, who was on hand to photograph the autograph being given, snapped me walking away with a decidedly bemused look

It turned out that the highlight of the 1989 festival was hearing the legendary Cab Calloway performing Minnie the Moocher with the Glasgow audience enthusiastically yelling the “ho-de-hoes” back at him, and waiting, programme and pen in hand, for him to leave the theatre after the show…

By way of previewing the 25th Glasgow Jazz Festival, which this year includes a Jazz on Film strand, the Glasgow Film Theatre is showing a couple of movies – and I’ll be introducing them..

First up, the definitive – and original – jazz documentary, Jazz on a Summer’s Day (1959), which is showing on Saturday, June 25 at 1.45pm. I’ve written extensively on this wonderfully evocative film before – so please read my jazz and style posts about it.

I am delighted that we’re showing it as a taster for the Glasgow Jazz Festival because it is a favourite film of Glasgow audiences. It also ties in rather nicely with a concert I had a wee hand in: the Classic Jazz Orchestra’s concert, which pays tribute to two of the big names who appeared at the first two editions of the Glasgow Jazz Fest – Benny Carter and Gerry Mulligan. Saxophonist extraordinaire Alan Barnes is playing both the part of altoist Carter and baritone player Mulligan. And the connection with JOASD? Well, Mulligan can be seen both performing and being a jazz fan (he’s pictured in the poster above) in Bert Stern’s iconic documentary.

The other film I’m introducing (at the GFT, on Monday June 27 at 6pm) is not really a jazz film but was chosen because its  music was written by the great Michel Legrand, who is performing with his trio to the Glasgow Jazz Festival, on July 2. I thought that Les Demoiselles de 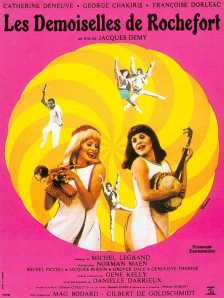 Rochefort, the tongue-in-cheek 1967 homage to the classic Hollywood musical, was much more likely to appeal to a jazz audience than something like The Thomas Crown Affair as the music does have a bit of a jazz feel in parts – mostly when Legrand is playing piano. Also, I’ve heard that this is Legrand’s favourite of his own films..

I first saw Les Demoiselles a couple of years ago and have been obsessed with it ever since. It’s kitsch but stylish, cheeky but romantic, silly but – typically, given that it’s French – deadly serious about l’amour… It has frothy, camp pop tunes and lush, romantic ballads. I’m not 100% sure whether Catherine Deneuve, Francois Dorleac, Gene Kelly, Jacques Perrin, Danielle Darrieux, Michel Piccoli and George Chakiris did their own singing – but hopefully I’ll find out when I interview Monsieur Legrand next week.

Filed under Jazz on Film