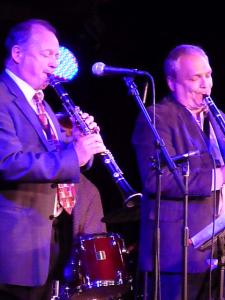 The Peplowski-Barnes double-act may not have played in Edinburgh before – but its reputation, honed over the last few years at the Lockerbie Jazz Festival where it’s been THE Saturday night gig to attend, clearly preceded it, judging by the impressive turn-out at the Spiegeltent on Sunday evening. And by the fact that some of that impressive turn-out had made the journey from Lockerbie …

The reasons for the popularity of this pair were immediately apparent on Sunday – and not just in the terrific music they made, accompanied by a trio led by Paul Kirby. Anyone who’s seen either Barnes or Peplowski in concert knows that they’re going to be entertained by their patter – and when the two of them get together the fun they have onstage is utterly infectious. One number – Hanrid – couldn’t get fully underway because Peplowski was laughing so much he couldn’t play. No-one in the audience had any idea what had triggered it, but it was impossible not to share his Dudley Moore-like giggles.

Both being saxophonists and clarinettists, there are myriad ways Barnes and Peplowski could perform any tune (alto and tenor sax; two clarinets; one on clarinet, the other on a sax) but, on Sunday, the tunes they chose tended to feature either the two clarinets or two saxes combination. And with winning results. The two-sax Fajista, by now a signature number for the duo, was a highlight but the twin clarinet numbers stole the show; on Barnes’s own composition, the loving homage Humph, the effect was sultry and langorous as the melody unfolded in the chalumeau register of the clarinet. And the encore, demanded by an audience which went nuts for more, of Body and Soul, underlined how luxurious and exquisite two clarinets can sound together – when they’re being played by the best in the business.