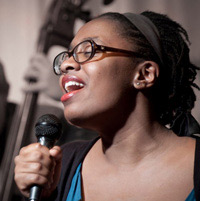 Whether it was the Spiegeltent audience’s enthusiastic reception or the fact that they were able to play their favourite tunes – as opposed to being limited to one or two composers’ output – the musicians of the Classic Jazz Orchestra were in especially fine form for their Sunday night session.

As leader Ken Mathieson has often explained, this band draws its repertoire from right across the first half-century of jazz, from the 1920s through to the 1960s – and Sunday’s varied programme was effectively a musical version of this manifesto. Both sets kicked off with numbers recorded definitively by cornettist Bix Beiderbecke in the years running up to his 1931 death (it was a treat to hear Way Down Yonder in New Orleans again, with the band playing Beiderbecke’s glorious solo as part of the arrangement) before moving on to tunes ranging from Jelly Roll Morton to Gerry Mulligan, with one of their new party pieces- Antonio Carlos Jobim’s slithery Waters of March a particular highlight.

Cecile McLorin Salvant, the young American singer who made her debut in Edinburgh this weekend, joined the band for a handful of songs – and blew the audience away. Her lovely, bright voice and habit of paring down the tune and holding back on the beat recalled Billie Holiday on the bouncier tunes, yet she displayed Sarah Vaughan’s ugly-beauty approach when it came to her stand-out song, the ballad Born to Be Blue.