Here’s another video I filmed of Annie Ross in Glasgow last month. Forgive the  wobbly camera work .. I had to move to a better position, closer to the stage, for this one as I knew it would be a treat..

From the Vaults … Scott Hamilton @ Glasgow Society of Musicians 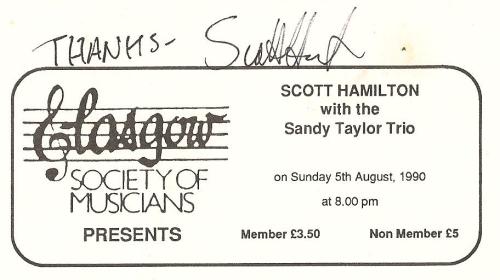 I’ve been having a bit of clear-out and discovered some old tickets from my early concert-going days at the wonderful Glasgow Society of Musicians, a slightly ramshackle and innocuous-looking building (on the outside) with a front door that always reminded me of a speakeasy. It was here – and at the Edinburgh Jazz Festival – that I first heard many of the musicians who would become my favourites.  And one of these was the American tenor man, Scott Hamilton (pix are on my Glasgow Jazz page).

This was a few years before I became a reviewer (Scott Hamilton being the first musician I ever reviewed – more on which anon) and although I wasn’t equipped with notebook at these early gigs, I still had an urge to record the titles of the tunes that had been played – so I’d scribble them down on the back of the tickets. In the privacy of the ladies’ toilets.  As the only young female (in fact, one of the females of any age) at most of these gigs, I really didn’t want to draw any more attention to myself by looking like a critic…

Scott returned the following August – ah, those were the days of the annual visit to Glasgow by visiting American soloists. I’ll stick these tickets and info on the Glasgow Jazz Archive page but in the meantime, here’s what he played on August 11, 1991:

I don’t want to rub it in (but I will if you want me to!) but here’s a wee taste of how Annie Ross sounded in Glasgow a fortnight ago .. More will follow – temperamental camera allowing..