The New York-based singer-pianist Daryl Sherman is currently one-third of the way into a three-month residency in Japan – and she sent this share-worthy little anecdote to me this morning:
In my lengthy career this one beats all!   You can’t make this up.
It’s Christmas week at my sweet Tokyo gig, Tableaux Lounge in chic Daikanyama.
Waiter comes up with song request written on paper:
First some Japanese words — then written below: “Buy me meat asean.”
Baffled by what the heck this might be, I approach an elegant Japanese lady seated close to piano.
She takes a look and immediately utters (quite clearly)  “Bei Mir Bist Du Schoen”
“You can’t be serious!” I exclaim — and then she starts to sing it. I run back to piano and the whole room starts singing along. They even knew the “bela bela — wunderbar” part.
(N.B. Oy, nary a bagel in sight around these parts..)
Then.. more unlikely serendipity –this lady turns out to be one of the most famous actresses in Japan, Ruriko Asaoka!
Clearly the highlight of my trip. So far .. 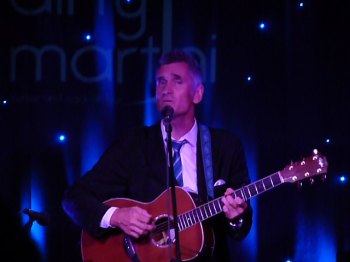 The four months which have passed since Curtis Stigers last walked off the stage at the Dirty Martini evaporated in a nanosecond on Monday night when he didn’t so much start a new residency in the opulent, and intimate venue – as pick up where he left off in the summer, greeting the packed audience like old pals, and engaging in the same sort of cosy, often confessorial, banter that had marked his July appearances and helped make them so enjoyable.

Stigers clearly thrives in this “Up Close and Personal” type of gig, accompanied by just guitarist James Scholfield. Not only is there the engagement with an adoring audience which hangs on his every word from an unusually close vantage point, but there’s an informality and looseness to the show, which allows Stigers’s dry sense of humour to flourish – and inspired him on Monday to play well beyond last bus time.

Anyone who heard Stigers in the summer knows that his repertoire spans his old pop hits, more recent singer-songwriter material, original songs and standards from the Great American Songbook. Only at a Stigers gig would you hear the sublime and rarely sung Rodgers and Hart ballad You Are Too Beautiful followed by the US biker drama Sons of Anarchy’s hard rock theme tune, on which Scholfield unleashed his inner Jimi Hendrix to memorable effect.

And the variety doesn’t end there: with his vocals, two saxes and acoustic guitar, plus Scholfield’s electric guitar, there is a rich palette of sounds for Stigers to work with. Consistent throughout, however, were his energy; his gutsy, emotionally honest and utterly mesmerising singing and the rapport between two like-minded, top-notch musicians. If you don’t catch them this week, it surely can’t be long until they’re back …

First published in The Scotsman on Wednesday, December 5th

I’ve Been Sleeping With the Light On

On the Streets of New Orleans

You Are Too Beautiful

You’re All That Matters To Me

End of the Afternoon

You’d Be So Nice to Come Home To

Where the Mountains Meet the Sand

The pianist Stan Greig, who has died at the age of 82 following a long illness, was a stalwart of the British jazz scene for 60 years and was known for his boogie-woogie prowess, and his convivial nature. As pianist or drummer (he took up drums, he said, because he was so often confronted by duff pianos on gigs), he played in key bands in the British trad jazz revival movement, among them the groups led by Ken Colyer, Acker Bilk and Humphrey Lyttelton before embarking on a fruitful freelance career in middle age.

Born in Joppa, Edinburgh in 1930, Stanley Mackay Greig was the son of a piano tuner and repairer. At Edinburgh’s Royal High School in the mid-1940s, he formed a band with fellow pupils who, like him, were mad for 1920s jazz. The Royal High School Gang’s front line featured the now-legendary duo of clarinettist Sandy Brown and trumpeter Al Fairweather. It rehearsed in Greig’s living room, and almost immediately began playing gigs. Greig continued to play with Brown and Fairweather after they had all moved to London; their fantastically distinctive album Doctor McJazz is one of the all-time greats.

On leaving school, Greig took up his father’s trade and worked with him until the age of 24 when, as a drummer, he signed up to Ken Colyer’s London-based band. He joined Humphrey Lyttelton just in time to play drums on the 1956 recording session that produced the Top Twenty hit, Bad Penny Blues, but his tenure with Lyttelton was interrupted by the Suez Crisis – he was called up as a reservist – and when he returned, he had to share the drummer role with Eddie Taylor, who had been brought in as his replacement. Greig soon quit to go on tour, as a pianist, with the American gospel singer Brother John Sellers.

Greig spent much of the 1960s on the road as pianist with Acker Bilk’s Paramount Jazz Band which was riding high on the success of their hit Stranger on the Shore. After eight years, he left and spent a year running a coffee shop before emerging as a freelance juggling all sorts of gigs with piano tuning jobs (Mick Jagger was one of his regular clients). In 1975, he formed the London Jazz Big Band, a 16-piece outfit which featured many big names on the London scene, had a devoted following for ten years, and was very much a labour of Greig’s love. (He even built the music stands.)

Multi-instrumentalist Alan Barnes, who worked regularly with Greig when both were in Humphrey Lyttelton’s band in the 1980s, describes the London Jazz Big Band as “one of the most joyous big bands ever”.

Barnes adds: “He was a great spirit to be around and a real driving force in Humph’s band. One of his original boogie compositions had a break in which he would shout out the song title. I can remember his sudden appearance in the pulpit above the band in Peterborough Cathedral yelling ‘Beano Boogie!’ at an amazed congregation.”

The clarinettist Forrie Cairns, who played duo gigs with Greig in the 1970s, recalls: “Stan was a musician totally absorbed in the music all his life, and a pianist who differed from almost all the other good British pianists in his amazing feel for blues and gospel music. He played that style like the black American musicians did.” Which is no doubt why, in the 1980s, he toured Europe with the Harlem Jazz & Blues Band, an otherwise all Afro-American line-up of veterans from the golden era of jazz.

By 2002, the onset of Parkinson’s Disease had begun to hamper Greig’s ability to play. At a benefit concert in his honour that year, he was assisted by Jools Holland, and at a wonderful tribute concert to Sandy Brown at the 2002 Edinburgh Jazz Festival he shared piano duties with his old friend Ralph Laing.

Twice divorced, Greig is survived by his first wife and by their three children.