The peerless singer Carol Kidd, whose concert on Wednesday night kicked off the Fruitmarket strand of the Glasgow Jazz Festival, is a woman on a mission; possibly a kamikaze mission – if this week’s concert is anything to go by.

Having completely mesmerised the packed Fruitmarket audience with a gorgeous Skylark and a heartfelt Time After Time – and despite saying “I won’t talk; I’ve got so many songs to get through” – she abruptly broke the spell by announcing “I don’t give a monkey’s if you like these songs or not” . Well, that’s one way to alienate your audience; drawing attention to individual members for taking a toilet break is another – which she also deployed early on in the proceedings.

Still, once she’d got that out of her system, she (at least) seemed to relax. Despite having a top-notch, though slightly uncomfortable-looking, band onstage with her, only her longtime guitarist Nigel Clark was given much solo space. Indeed, his duets with Kidd were highlights of the evening. On Moon River, a song they have made their own, he dished up a solo of exquisite tenderness, while Songbird and their own original number Tell Me Once Again underlined what a wonderful musical couple they make.

Kidd, whose first major gig this was after being treated for breast cancer, may have sounded a bit bruised and the voice may not have soared with the trademark Kidd purity, but she put over those ballads as movingly as ever.

Other highlights included an appearance by a Spanish saxophonist friend, introduced simply as Santiago, who stole the show with his gorgeous take on the waltz Emily and singing the Antonio Carlos Jobim part on Corcovado.

First published in The Herald on Friday June 28th

I’m Beginning to See the Light

I Got Plenty of Nothin’

How Do We Keep the Music Playing?

I Thought About You

Tell Me Once Again 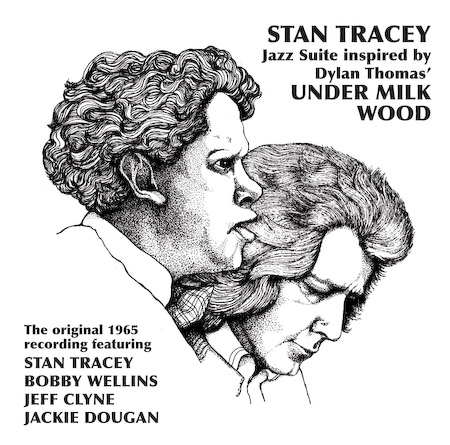 It’s 20 years since I covered my first jazz festival – the 1993 Glasgow Jazz Festival, and 20 years since the  Old Fruitmarket was opened as the main venue for that same festival. This year’s event opens and closes with musicians who played in the Fruitmarket in its first festival. Here’s the article I wrote in 1993 about a couple of them….

To begin at the beginning. In 1965 the English jazz pianist Stan Tracey wrote and recorded with his quartet his Jazz Suite: Under Milk Wood, inspired by Dylan Thomas’s eponymous radio play. Now, 28 years later, what various critics have described as the best British jazz record ever made has just been reissued on CD on the jazz label, Blue Note. [2013 note: it’s now available on the Trio label.]

According to the original sleeve notes, Tracey played over to himself the dramatised recording of Under Milk Wood before he began to compose his themes. So how much of a resemblance does the Jazz Suite bear to the Thomas play, and does it really matter?

Being completely unfamiliar with both the Under Milk Wood works seemed to make me uniquely qualified to listen to it for its own merits before trying to make sense of its connection with the play.

As performed by Stan Tracey (piano), Glasgow’s own Bobby Wellins (tenor saxophone), Jeff Clyne (bass) and Jack Dougan (drums), the suite is a collection of eight tracks – each distinctive in character but linked by a bluesy feel and some of the best playing I’ve ever heard.

The opening two tracks are wonderful: the first is the instantly hummable Cockle Row, a groovy number that introduces the splendid Tracey/Wellins partnership. Starless and Bible Black is a complete contrast, laidback and beautiful.Wellins’s breathy sax breezes over a repeated series of haunting minor chords on the piano, bearing echoes of Eric Satie.

Another personal favourite is Penpals, with its catchy theme, funky beat, and changing moods – happy to sad, then back again, like an exchange of letters. But for me the loveliest example of this ensemble’s work is the track based on the play’s title, Under Milk Wood.

The melody – far more optimistic this time, but tinged with yearning – is carried by Wellins, clearly under the influence of that other great Stan, the late Mr Getz. Tracey’s piano is flawless, a perfect complement to the evocative lyricism of his sax man.

The play itself was a revelation. Having absorbed the Tracey suite, I was all set for a sad romantic melodrama. I couldn’t have been more wrong. Dylan Thomas’s Under Milk Wood covers a day in the life of a lively Welsh village peopled by characters with such inspired names as Organ Morgan (the organist), Willy Nilly (the postman), and the fisherman, No Good Boyo. Despite the apparently everyday nature of the town in question, all – including its name, Llareggub – is not what it seems.

We know this because we are privy to the thoughts  and fantasies of the superficially normal villagers – like Mrs Ogden-Pritchard, who sleeps between the ghosts of her two nagged-to-death husbands and makes them chant in unison household rules such as “I must blow my nose in tissue and burn it after.”

I listened to the 1963 BBC radio dramatisation of Under Milk Wood, narrated by Richard Burton – probably the same version that inspired Stan Tracey, and it would be easy to see why. With its oddball characters and rich range of voices, its vivid tableaux of village life and poignant black humour, there is enough in this superb play to inspire a few more recordings.

And so to the connection between the Dylan Thomas and Stan Tracey masterpieces. No doubt Tracey was moved by the play to write some music for a jazz quartet, but there was little in the dramatisation that reminded me of the music. The only specific evidence of the link is the titles of the individual compositions: Tracey’s LP is really a collection of highly personal impressions of phrases (“starless and bible black”), characters (No Good Boyo) and places (Llareggub).

It could equally have been called Eight Eccentric Aunties from Edinburgh. But who cares, when the results are so outstanding?

* Under Milk Wood is the subject of a Classic Album Sundays listening session at the City Halls Club Room on Sunday June 30 at 6pm, and the Stan Tracey Quartet, featuring Bobby Wellins, plays the Old Fruitmarket at 8pm that same night. Visit www.jazzfest.co.uk for full details.