Dope addict, punchbag for her partners, target of racial prejudice – Billie Holiday, who was born 100 years ago this month, has long been universally known not just as jazz’s greatest singer but also one of its saddest casualties. The phenomenally gifted vocalist, whom Frank Sinatra credited as his “greatest single influence”, is associated in many people’s minds with tragedy, oppression, abuse and the blues. But the truth is that the iconic Lady Day was not – for much of her existence – a downtrodden, pathetic creature at all.

Just because the key events in Holiday’s life – a possible rape when she was ten years old, an enforced separation from her mother, working as a prostitute in her teens, getting hooked on heroin, spending time in jail and suffering terrifying racial abuse – could have made her a victim, it doesn’t automatically follow that she was. Holiday’s final years were undoubtedly tragic but one shouldn’t assume that everything that went before was too.

Her death has come to overshadow her life; the ebullience and life-affirming qualities inherent in many of her recordings and in her personality – as described by friends and colleagues – until her last decade are often overlooked, swept aside by society’s need to slot everyone into a category.

But Billie Holiday was far too complex a character to be pigeon-holed simply as one of life’s victims. For one thing, she was not the type of person to allow herself to be pushed around – at least by anyone other than her lovers. And if anyone tried, the chances are they would get a fat lip, or at least a mouthful. On numerous occasions, especially in her flaming youth, Holiday squared up to bigots – walking away was not an option.

There are various tales of how Holiday reacted to instances of racial prejudice – and they all involve her taking decisive, often reckless,

action. On the road with Artie Shaw’s all-white band in 1938, she knew that things would be tough below the so-called Mason-Dixon Line: rednecks in the South would tolerate black people as entertainment, but this being the land of lynchings and the Klan, they wouldn’t acknowledge them as human beings.

During one show, Holiday was going down a storm but when a voice from the audience yelled: “Have the nigger wench sing another song!”, her simmering rage exploded and, in front of a packed auditorium, she clearly mouthed an obscenity which, as Shaw later recalled, caused “all hell to break loose”.

Other stories involve barroom brawls and Lady Day – for all her fisticuffs and foul language, she was the most elegant of singers – inviting ignoramuses who slurred her to step outside for a fight. Her pianist Bobby Tucker later said: “She beat the crap out of a guy at the bar who called her ‘nigger bitch’.”

Despite having no fear about standing up to the thugs and bullies she came across when she was out in public, Holiday allowed herself to be beaten up by a string of violent male partners – and there’s never been much evidence of her defending herself against them in the way that she did with strangers. Dan Morgenstern, the leading jazz expert who knew Holiday in the 1950s, is one of a number of her acquaintances who believes that: “She had a strong masochistic streak. She wanted guys who would hurt her both physically and emotionally.”

The two sides of Holiday’s personality are clear from one of the songs that became inexorably linked with her: My Man. It’s very much a song of two halves – the first, in a minor key, is all about the singer’s troubles with her lover (“Two or three girls has he/That he likes as well as me/But I love him”); the second is in a major key, slightly faster and much more hopeful (“All my life is just despair/ But I don’t care/When he takes me in his arms/ The world is bright, alright”).

Holiday recorded it three times – once in each decade of her recording career – and by the second recording, in 1949, she had added the lines “He beats me too/What can I do?”. That this song, though written by someone else, summed up her own point of view is clear from the fact that she ended her autobiography with a quote from it: “Tired? You bet/ But all of that I’ll soon forget with my man ..”

Of course, Holiday’s wilfully self-destructive habit of choosing brutes as her romantic partners was mirrored by her self-destructive drug addiction which has become the main theme of the Billie Holiday story over the years. Aside from the physical toll that heroin took on her, it also sapped her battling spirit and her lust for life. It turned her, when she was in thrall to the drug, into a different person and it cost her many friends.

Holiday’s tragic image was partly her own creation. In 1955, desperate for money to finance her habit, and aware of the fact that there was a demand for confessional memoirs, she dictated her autobiography to journalist William Dufty. It’s a compelling read, with Holiday’s characteristically “salty” language suggesting its authenticity but the reality was that it was full of exaggerations and deliberate distortions on her part. She hoped that the sensational aspects – which, before the publishers got cold feet, were to include details of her sexual adventures with everyone from Tallulah Bankhead to Orson Welles – would attract Hollywood’s attention.

Indeed, it’s from the autobiography that much of the Holiday myth originates, as she allowed herself to come across as a victim. Even the title, Lady Sings the Blues, which was imposed by the publisher, is inaccurate: Holiday was not a blues singer; she rarely sang the blues.

Holiday’s tragic image was further consolidated in the public consciousness by the 1972 biopic, also entitled Lady Sings the Blues, which featured a harrowing performance by Diana Ross but had even less to do with the facts of Holiday’s life than her memoirs. Several key figures in her career, including Benny Goodman and Artie Shaw, refused to allow their names to be used.

Perhaps Goodman and Shaw, who both met Holiday in her earliest years on the jazz scene, simply didn’t recognise in the Lady Sings the Blues character the insouciant, fun-loving girl they had known. Her friends from the 1930s and 1940s remember a bawdy young woman with a lust for life, and an appetite for sensation.

Even in her final decade, the 1950s, there were still glimpses of her wild ways. Singer Annie Ross, who was one of the friends who stuck by her till the very end, recalls an afternoon in Paris where they drank their way down the Champs-Elysees, cafe by cafe, supposedly on a 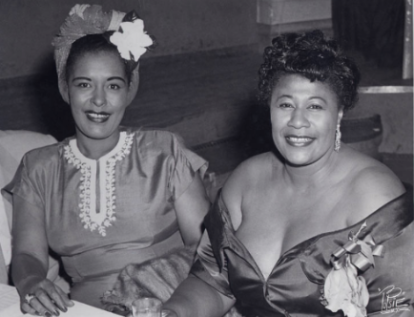 shopping expedition. After visiting a fancy boutique where they viewed tray after tray of jewellery, Lady Day tipped out her pockets to reveal to her young friend a stash of necklaces and other baubles.

But for proof positive that the happy-go-lucky, “don’t careish”, Billie Holiday existed before – and then alongside – the rather more troubled Lady Day, just listen to her legacy of recordings. Yes, you’ll feel pity for the later Holiday with the voice that has paid the price for her lifestyle, but you’ll also feel uplifted by the sheer joie-de-vivre she exuded throughout the 1930s and then on occasion until she died, on July 17 1959.