Mike Hart, who has died at the age of 84, founded the Edinburgh Jazz Festival – Scotland’s first such event – and, in so doing, consolidated the city’s status as an epicentre of classic, traditional and mainstream jazz. The jazz festival he created may have evolved and mutated over the four decades since it began, but it has kept Hart’s kind of jazz at its core.

An only child born in Inverness, Hart moved to Edinburgh when his father (a former engineer) set up an antiques business later run by his mother. After a brief, unhappy spell in boarding school in England, Hart was educated at Edinburgh’s Royal High School, a breeding ground for trad jazz musicians in the late 1940s when that genre of jazz was enjoying huge popularity. The teenage Hart took up drums and by 1949, was playing in a local band, Gavin’s Gloryland Jazz Band, led by trumpeter Jimmy Gavin.

One night, around the same time, in the West End Café, Hart was invited to sit in with the band led by clarinettist Sandy Brown, a maverick and now legendary figure. As Hart told Graham Blamire, the author of Edinburgh Jazz Enlightenment – The Story of Edinburgh Traditional Jazz, “I nearly fell over but immediately accepted”.

So began Hart’s association with Brown, and the trumpeter Al Fairweather and the pianist Stan Greig who also played in the band. With them, Hart went to London in 1952 where their gigs include the Big Jazz Show at the Royal Albert Hall.

After completing his National Service in the RAF, Hart returned to Edinburgh in 1954 and played banjo in trumpeter Charlie McNair’s band. Before long, he had established his own outfit, Mike Hart’s Blue Blowers, and in 1956 he co-founded what would become one of Edinburgh’s longest-running bands, the Climax Jazz Band which featured Jim Petrie on cornet and which would take Hart into the recording studio for the first time. The late 1950s saw the birth of two more popular bands which he co-led, Old Bailey and his Jazz Advocates and the Society Syncopators.

While his jazz career was bubbling away, Hart – who married his first wife, Moira, in 1960 – supported himself and his family via a number of jobs, including agricultural feed advisor, sail boat skipper in France, variety club producer and tour manager (for the likes of Jimmy Shand and Andy Stewart) and, ultimately, from the mid-1970s, running a successful antiques business with his mother, to whom he was very close.

By this time, he had re-formed and re-launched the Society Syncopators as Mike Hart’s Society Syncopators – and it was this band which Hart took on foreign tours on many occasions, notably to the Dunkirk Jazz Festival, where it was named European Amateur Jazz Champions 1979, and to California’s Sacramento Jazz Jubilee which it visited ten times.

Keen to stage something similar in Scotland, Hart spent a great deal of time with the Sacramento Jazz Jubilee’s director, Bill Borcher. Fionna Duncan, who sang with Hart’s band, recalls: “Bill had a sort of ‘war room’ in his house where he plotted out the programme, moving bands and audiences from one venue to the next using models!” This type of planning manifested itself in the way the Edinburgh Jazz Festival was structured during Hart’s tenure.

Hart brought together a number of local bands plus a couple of well-respected soloists from England and staged a mini festival in a ballroom in the capital in 1978.Its success inspired him to seek sponsorship for the first Edinburgh Jazz Festival which took place in 1979, and featured a variety of semi-professional bands from here and abroad.

But it was in 1980 that Hart began to operate the policy which helped define the festival (re-named the Edinburgh International Jazz Festival): he began to hire individual jazz stars, many of them veterans of the great American bands of the 1930s onwards, who had been sidemen in their youth but were now happy to be more in the spotlight. Such now-legendary players as Teddy Wilson, Doc Cheatham, Harry Edison and Milt Hinton all visited the Edinburgh Jazz Festival during its first decade.

Into the mix, Mike Hart added younger players who were part of the mainstream revival. All these musicians would stay for several days, if not a whole festival, at a time and would be mixed and matched in different line-ups, often featuring Scottish talent in the rhythm sections. Many of today’s leading Scottish players – among them pianist Brian Kellock and bassist Roy Percy – cut their teeth at the EIJF, invariably alongside big name Americans.

When the jazz festival became a limited company, Hart assumed the role of Artistic Director, and later Founding Director. In 1995, he was awarded an MBE for his services to jazz, and he also received a citation from the City of Sacramento in recognition for his work.

Always a figure who cut a dash and who had something of the old-fashioned adventurer and bon viveur about him, Hart threw himself into other passions beyond jazz. He was an accomplished deep sea fisher (a photo of him and the 180lb Blue Fin Tuna which he caught during a trip to Madeira with author and deep sea fisherman Trevor Housby is featured in Housby’s best-selling book). He also enjoyed sailing and racing his wooden keelboat, then he got hooked on flying, learning to fly a single engine Cessna aircraft and gaining his private pilot’s licence in 1985. That passion gave way to driving and owning a Triking wheeler sports car and attending events for enthusiasts. Jazz remained the constant while other interests came and went.

Graham Blamire says: “Mike would never have claimed to be an innovative or particularly original jazz musician but he was a fine player, both as a member of the rhythm section and in his solo work. He could be a volatile and demanding individual with whom to work, but he had vision, energy and determination and, when he wanted, a great deal of charm. He was a major influence on Edinburgh Jazz for a very long time, a leading figure in some of Edinburgh’s best bands, and he left his mark on jazz at an international level through his creation of the EIJF, which will be his enduring memorial.”

Hart, who was twice married and divorced, is survived by his children Susan and Michael, and three grandchildren.

This obituary was first published in The Herald on Wednesday, December 26 2018

Old Bailey & the Jazz Advocates, 1965, at the Manhattan Club. Thanks to Hamish McGregor (clarinet) for the photo. 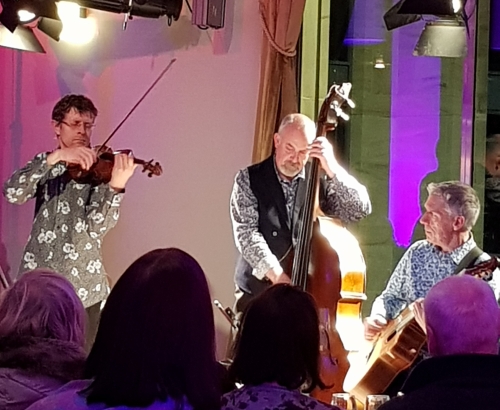 The Royal Scottish National Orchestra didn’t have a monopoly on the classical goings-on in the Concert Hall on Saturday night; upstairs, in the elegant former restaurant space, a trio was performing Bach, Brahms and Vivaldi pieces which it has recorded with orchestras for Sony Classical over the last few years.

The Tim Kliphuis Trio doesn’t merely “swing the classics”, however. Kliphuis (violin), Nigel Clark (guitar) and Roy Percy (bass) started out as a superior gypsy jazz group and their renditions of the classics are very much shaped by their roots in the swinging, life-affirming spirit of the music of the great Stephane Grappelli and Django Reinhardt.

On Saturday, some of the classical numbers – such as the Allegro in G from Bach’s Brandenburg Concertos – sounded as if they had always been jazz tunes, opening with riffs played in unison by this impeccably in-synch trio, before erupting into solos that spotlighted the breezy virtuosity of the individuals.

Showmanship and drama also played a part, with the first set’s electrifying closer – Winter, from Vivaldi’s The Four Seasons – breaking the speed limit and bringing many members of the audience to their feet. (That number was one of many on which it was a difficult to hear Nigel Clark’s dazzling guitar-playing without straining. The acoustic in the room meant that whenever he played a delicate, quiet ballad or was being accompanied on a solo by both of his colleagues, he was in danger of being completely drowned out.)

The classical pieces were beautifully balanced by a handful of French and American numbers from the 1930s, notably the ballad Ou es tu?, once sung – as Kliphuis explained – “by Edith Piaf, Jean Sablon, Maurice Chevalier and ..”

* First published in The Herald on Wednesday December 5th