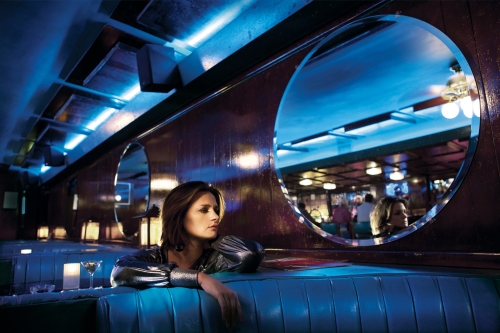 Madeleine Peyroux has a lot to answer for – not least this jazz critic’s closet conversion to country ‘n’ western fan. The 39-year-old singer and guitarist, whose 2004 breakthrough album Careless Love won millions over thanks to her languid, sultry, Billie Holiday-like vocals and penchant for blurring musical genres, is back with a new album. And whereas previous albums have all hinted at a predilection for country ‘n’ western, this one – The Blue Room, which is released on Monday – positively yells about it. After all, the tracks include such country classics as I Can’t Stop Loving You and Take These Chains From My Heart.

Actually, it wasn’t a love of country ‘n’ western music per se that inspired this record; it was the love of the songs from one particular LP: Ray Charles’s landmark 1962 album Modern Sounds in Country and Western Music. That record is regarded by most experts as one of the most important LPs of the 20th Century, not just because it fused together different musical genres – rhythm ‘n’ blues, blues, soul, gospel and country music – but because it broke down racial barriers between “black” music and “white” music at a critical time in the American Civil Rights movement.

Peyroux, who now has notched up three more successful CDs since Careless Love topped the charts, admits to being initially taken aback by her producer Larry Klein’s suggestion of a tribute album. She says: “I immediately asked if he wouldn’t rather do this with a bunch of people and make it a bigger collaboration. I was worried about how well I could represent all the things you might want to say about that album, but I was over the moon about having the opportunity to speak on MY relationship with the music that Ray Charles made, and how that’s been a part of my life.”

As a native of Charles’s home state of Georgia, Peyroux had been aware of the legendary singer since her childhood when she grew up hearing an eclectic range of music in the family home. She admits that she wasn’t familiar with Modern Sounds in Country and Western Music or its sequel – but she knew the songs from numerous compilations, and she relished the chance to get her teeth into them. “I love the fact that this is a female voice singing songs that were written for men to sing – it makes a big difference for me to experience it from that perspective,” she says.

Over the course of the year’s researching, discussing and planning her record, the singer came to the conclusion that she didn’t want to replicate the track listing from the original; that she’d like to mix in songs that were written since Modern Sounds – and represent the five decades since it shook things up musically in America. But five Modern Sounds songs are at the heart of The Blue Room – and Peyroux and Klein have done a great job of reimagining them, and Peyroux has made them her own.

Indeed, what comes across very strongly is that this album – which comprises other people’s compositions – sounds so personal, almost as autobiographical as Peyroux’s 2009 CD of original material, Bare Bones. Peyroux’s explanation is that “these might be the most intimate arrangements I’ve ever sung – they’re very naked and revealing in the way they’re constructed, in the way they support the voice and that’s one of Larry’s signatures”. But much of the personal feel is to do with the song choices. Did any of them resonate particularly with her?

“Born to Lose really hits home. I have a melancholy side and I think that’s probably no surprise to people who have heard my songs and my song choices over the years, and how I perform, and Born to Lose has melancholy in bold face definition – like this is what it’s about.”

Another one that leaps out as being a perfect vehicle for Peyroux – whose unsettled past (her turbulent relationship with her late alcoholic father; her years in Paris as a street musician living rough; her vanishing acts just after her very first CD was released back in the mid-1990s and then again when she was touring with Careless Love in 2005) has been well documented – is Randy Newman’s Guilty, about a tortured soul who’s drinking because “it takes a whole lot of medicine for me to pretend I’m somebody else”. Peyroux loves the fact that it’s a song that was written by a male singer-songwriter. “I actually think a lot of people wouldn’t imagine a woman singing those words.”

Indeed, it was an early morning session in a California bar that inspired the title of the album – a title which has absolutely nothing to do with Rodgers and Hart, who wrote a song of the same name. Peyroux explains: “I did the photo shoot for this record in a bar in Burbank. It was called The Blue Room.It was just a very old school, maybe sort of 1950s, bar, with mirrors and blue leather booths, no windows, no natural light coming in, it gave on to a parking lot – you had to drive in to because in Burbank it’s all roads and highways. I met some people that were there drinking and talked to them.

“One of the gentlemen there was from Selma, Alabama. He had been born in the 1940s and had lived through the civil rights riots in Selma, Alabama during the 1960s and then had been carted off to Vietnam where he had fought in the war under people that were from the south who were aware of his roots and gave him a hard time. When he came back he struggled to find a job, and ended up travelling around the United States as a salesman, as a clothing designer, as so many different things. He’d had a long life and he was there drinking at 10.30 in the morning and I asked him: ‘How did you end up here in Burbank? I mean, I understand you’re from Selma but why are you here?”. And he said: ‘I just couldn’t go no further.’

“It reminded me of so many American stories, stories about the United States of America and the culture here, and what it is to be American. And this whole record had a lot to do with that for me. It represents a lot of the questions that I think are part of what makes up the question of American identity because of the expansiveness of this country, the importance of the 20th century in our little history that we have here as a nation.”

Peyroux clearly also feels as if she’s been on a journey with this album, and has relished the chance to explore in more depth than before her relationship with country music. Are there any other musical interests or passions that have yet to be reflected on a Peyroux CD, I ask (after being advised to listen to more Hank Williams and Johnny Cash).

“Uh,” replies Peyroux slightly guiltily. “Well .. rap. I love a really good rap – there have been some though they’re rare!”

* The Blue Room (Universal) is out on Monday. Madeleine Peyroux plays the Cheltenham Jazz Festival on May 2.