It may be 83 years old, but the beautiful old tune Creole Love Call is certainly getting a work-out at this year’s Edinburgh Jazz Festival. And not only that; she’s the belle of the ball. On Tuesday, for the second consecutive night, Duke Ellington’s gorgeously smoochy ballad inspired some magical playing, this time an exquisite clarinet duet by Bob Wilber and Alan Barnes, with Howard Alden’s guitar evoking the famous growls on the original recording, and Ed Metz Jr adding a dash of the oriental with his cymbals.
Actually, it was one of many highlights of a concert which could easily have turned out to be an all-star shambles as there was no Dick Hyman this year to coral the participants (who also included saxophonists Scott Hamilton and Joe Temperley, trumpeter Duke Heitger, bassist Eric Harper and pianist Tom Finlay) into an orderly ensemble. However, what it did have was the equally senior Bob Wilber as leader, and it worked a treat.
The first set was entirely composed of Ellington and Ellingtonian numbers and what was especially pleasing was the fact that we weren’t short-changed on the full, nine-man band front: often at these all-star gigs, there are a couple of crowd-pleasing numbers by le tout ensemble at the start and thereafter it’s a series of individual soloists playing with the rhythm section.
On Tuesday, although smaller bands emerged within the bigger band, there was plenty of tout ensemble action – on such knock-out numbers as hard-swinging The Jeep is Jumpin’ and a laidback Squeeze Me, and, in the second half, on a sensational All of Me and a thrilling Hindustan, one of several tunes which stirred memories of Wilber’s great Soprano Summit band. 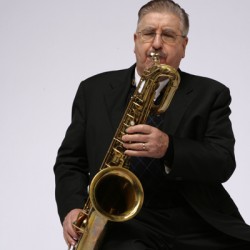 It’s bad enough that a jazz event which was bound to appeal to many older jazz fans was scheduled for a venue situated at the foot of a very steep hill, but to expect said older jazz fans to go back up the hill in order to queue to get in to that venue is just ridiculous. But that’s exactly what happened on Monday. Mind you, coping with inhospitable venues (the draughty, air-con-gone-mad Hub, the over-stuffed Royal Overseas League, the Queen’s Hall with its bottom-numbing pews etc) is something of an occupational hazard for jazz fans.
Still, once everyone was in and sitting as comfortably as they could, the Evening With Joe Temperley proved to be a wee gem. Mind you, it got off to an inauspicious start as it fell to Mrs Temperley to get up and introduce her husband along with pianist Brian Kellock.
It was billed as an evening of anecdotes and memories, and although 81-year-old Temperley did a very entertaining job of telling his life story, it could have done with an interviewer to probe him further on certain intriguing points that he merely mentioned in passing.
Kellock managed to ask a couple of questions, notably one about Frank Sinatra, with whom the Fife-born saxophonist worked in the 1970s. “Was he a nice guy?” asked Kellock. “Well,” said Temperley, “the bass player who worked with him for 20 years was leaving and as he left he said to Sinatra ‘I’m off’. Sinatra replied: ‘I don’t talk to the help.’ “
Of the musical interludes, a sublime Creole Love Call – an unexpected audience request – proved to be THE highlight of the festival thus far.