The concert I enjoyed most at the Edinburgh Jazz Festival was one I wasn’t reviewing for a newspaper – so, instead of taking notes, I took photos (just on my phone) of the first-ever encounter between top UK pianist Brian Kellock and two of the most regular members of the band that plays weekly at the Ear Inn in New York City – Jon-Erik Kellso (cornet) and Scott Robinson (clarinet & saxophone). They were joined by Dave Blenkhorn (guitar) and Roy Percy (bass). Scroll down beyond the slideshow for the set list …

Between the Devil and the Deep Blue Sea

I Guess I’ll Have to Change My Plans

Some of These Days

I’m Puttin’ All My Eggs in One Basket

Gee Baby Ain’t I Good To You

I Got a Right To Sing the Blues 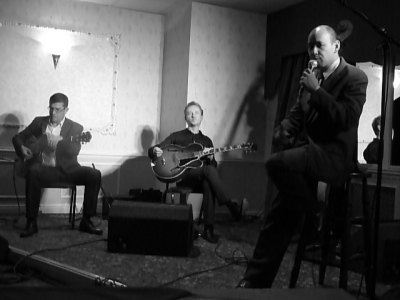 Based on what happened on Saturday night, it’s probably safe to say that a little bit of Lockerbie now belongs to Django a la Creole, the hugely popular jazz group which – as its star soloist Evan Christopher explained – “plays a Django Reinhardt tune and adds New Orleans flavours or takes a New Orleans tune and Django-ises it”.

Right from the off, the quartet – Christopher on clarinet plus the traditional Hot Club line-up of two guitars plus bass – had the audience utterly in its thrall and going wild after every tune. The spell was cast during the opening number, Douce Ambience, on which the Christopher clarinet started out soft and tender, slow and seductive before bursting into a fiery flight of passionate fancy.

Christopher never gives the spell a chance to be broken. Even when he wasn’t in the spotlight, and the super-dextrous lead guitarist David Blenkhorn was taking centre stage, the energetic Christopher was quietly wrapping his clarinet around the guitar solo. He came over as a bit of a musical snake charmer, dancing about onstage while playing a sinewy-sounding solo during Mamanita and faux-baiting Blenkhorn on the exuberant Riverboat Shuffle.

In addition to many tunes from the band’s two existing CDs, there were some new treats which may well feature on a live album to be recorded at the end of this British tour (the Scottish portion of which they have dubbed “The Road to Carnegie Hall … Dunfermline”). These included the evocative Sweet Substitute, which Christopher sang, a glorious That’s a Plenty and The Mooche, which hasn’t been played by such a menacing and thrilling clarinet since Kenny Davern’s day.

* First published in The Scotsman on Monday, October 1st.

The Django Reinhardt strand of the Edinburgh Jazz Festival came to an end on Saturday evening with a knockout performance by one of the most exciting Django-inspired groups. Django a la Creole has a Django-style line-up of – two guitars, bass and clarinet – but its accomplished lead guitarist, David Blenkhorn, doesn’t try to sound like the great gypsy jazz pioneer. And nor is its repertoire your typical Django one: this band, as the name suggests, dishes up its tunes with a variety of exotic flavours and rhythms. Some of the tunes were written that way; others benefit from the “Creole” treatment.
Of course, the band’s trump card is the American clarinet virtuoso Evan Christopher whose passion for the New Orleans style of Sidney Bechet and Barney Bigard fuses beautifully with the Django set-up. On Saturday, he was in great form, whether playing finger-busting duets with Blenkhorn on Riverboat Shuffle, I Know That You Know and Feerie or seducing listeners with his passionate playing on such intoxicating Caribbean-tinged tunes as Tropical Moon and Passaporte ao Paraiso.