To read my review of this concert, click here

You can read my review of this concert here. For the full list of musicians in the World Jazz Orchestra, scroll down to the bottom of this post.

And here’s a snippet of the orchestra’s take on Black, Brown and Beige – sadly, because the arrangements hadn’t arrived, more of the suite wasn’t played so this is a tantalising taster

To read my review of this concert, click here 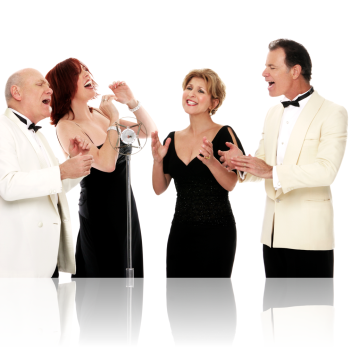 If the Olympics took in vocal events, then The Manhattan Transfer would surely be in the running. The four-piece close-harmony singing group may now be in its fifth decade but it shows no sign of slowing down – or of resting on its considerable laurels. Not, if its Sunday night concert was anything to go by.

Mind you, as far as the enthusiastic Edinburgh audience, which was comprised largely of the group’s contemporaries, was concerned, this quartet could do no wrong. Janis Siegel, Tim Hauser, Alan Paul and Cheryl Bentyne were welcomed onstage like old friends and immediately set out their stall as a super-slick, seriously swinging operation. So seriously swinging, in fact, that even the jazz festival logo, which was beamed onto the curtain behind them, was bopping up and down as they opened the show with their famous cover of the Ink Spots’ classic That Cat is High.

They zoomed about the decades, revisiting a string of hits from their long career together and demonstrating the range of their repertoire – from 1930s novelty tunes, via vocalese treatments of jazz recordings of the 1940s onwards, to their distinctive pop-like handling of songs they put on the map.

Among the numerous highlights were Soul Food To Go, a superb showcase of their gorgeous collective sound; the electrifying Birdland, which brought the house down at the end of the evening, and the vocalese number The Sidewinder, the Lee Morgan tune to which Jon Hendricks added lyrics. On that song, as with Chick Corea’s atmospheric and colourful Spain, Janis Siegel’s dazzling vocal acrobats stole the show, while her solo number, Jeepers Creepers, blew the rest of the group’s out of the water.