Some players just get better with age – and, judging by this new CD, Bobby Wellins is one of them. Featuring a wonderfully eclectic and imaginative selection of tunes from his working repertoire, it finds the great Scots tenor player in terrific form whether he’s powering through such uptempo tunes as the title track, balladeering wistfully on a standard or giving I’m Wishing (the love song from Snow White) a stylish, funky going-over. Of course, it helps that he’s surrounded by an ace trio – notably his long-term pianist John Critichinson. 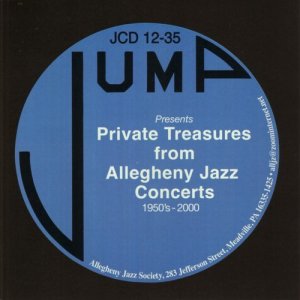 For lovers of classic jazz, the Allegheny Jazz Society is a familiar name as it has issued many great recordings on the Jump label. It has also played host to some great live performances, as this superb two-disc compilation demonstrates. Comprising numbers recorded across a 50-year period, it features groups including the likes of Marty Grosz, Ken Peplowski, Bob Wilber, Dick Hyman, John Sheridan and Scott Hamilton – all of whom have been regular visitors to British jazz festivals – as well as by the late, great Ruby Braff and Lee Wiley.

Two of US guitarist Howard Alden’s earliest influences were the gypsy jazz pioneer Django Reinhardt and the American great Barney Kessel – and he pays tribute to both on this new CD which also recalls the fact that, back in 1999, he was responsible for coaching Sean Penn in his role as a Django-obsessed guitarist in Woody Allen’s Sweet and Lowdown. Featuring a Django-style line-up (two guitars and bass), this is a joyful album which showcases Alden’s lyricism and dexterity on 13 sublime numbers. Cornettist Warren Vache and clarinettist Anat Cohen’s elegant contributions are the icing on the cake.

Italian-American pianist Vince Guaraldi – AKA Dr Funk – is best known for his catchy music for the Charlie Brown/Peanuts TV specials. However, before that association, he had already scored a hit with this 1961 album – which has at its core trio versions of the music from the influential 1959 film Black Orpheus (the movie that brought Brazilian music to worldwide attention) – and had topped the charts with his own complementary composition number Cast Your Fate to the Wind. Lovely, atmospheric stuff.