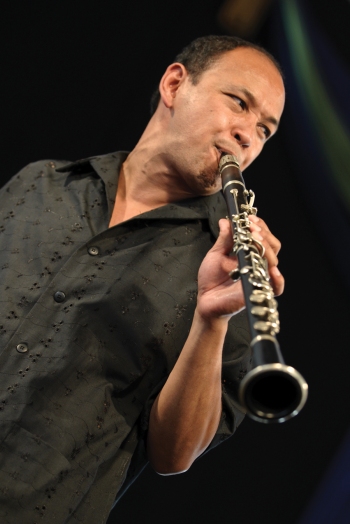 The first time I saw the American clarinettist Evan Christopher in concert, I feared for his personal safety. It was a balmy Friday night at the 2004 Edinburgh Jazz Festival, the Spiegeltent (a venue less beloved by jazz fans than by drinkers) was packed, and the liveliest section of the audience was a table of well-fuelled women who were clearly in party mode. As Christopher and his fellow thirtysomething Duke Heitger (trumpet) tore through their programme of traditional New Orleans-style jazz, the hen party went nuts – and I’m sure I wasn’t the only person in the audience hoping that the musicians were as accomplished at dodging volleys of flying knickers as they were at serving up hot solos.

It was a great concert – and the reaction of the hens helped to underline the fact that this may be the oldest form of jazz but it is still vibrant, fresh, sexy and able to stir a crowd, and not necessarily a crowd of aficionados. What particularly struck me at the time was that, in Evan Christopher, here was a poster boy for traditional jazz. He had a swagger, a sense of showmanship and a swashbuckling air about him when he played that made you sit up and take as much notice of him as the music coming out of his clarinet. It’s little surprise that he has since become something of a TV star in France where his current, hugely successful band Django a La Creole – gyspy jazz with a New Orleans twist – was born while he was effectively living in self-imposed exile after losing his home in the aftermath of Hurricane Katrina.

There may be an air of what some of the veteran musicians would regard as youthful arrogance and insouciance about Christopher (though he is now 41 years of age), but when he’s not playing, he is actually a surprisingly shy character who, it turns out, has had more than his fair share of obstacles.

Born of a Thai mother, he was adopted as a baby and raised in a predominantly white neighbourhood of Long Beach, California. For reasons he claims not to know – presumably he was gifted or exceptionally bright – he was sent to school two years early and consequently always found “the social side of school a little awkward”. He jokes about it – “basically it meant that chicks and sports didn’t enter the equation until later” – but two years is a big difference in high school, and it seems to have shaped Christopher into a self-sufficient, self-reliant character.

Indeed, he brushes off the inevitable question about how his musical talent was discovered, saying: “Music just happened to be something that I wasn’t bad at. It was something I could work at on my own; it didn’t require that I be around other people.”

It wasn’t until Christopher was in his final year of high school that his talent was taken seriously: he was invited to attend an arts boarding school. Up to that point, his experience of jazz had been gleaned from playing in the school band and from cassettes made by friends of his father, and from the LPs that his dad had in the house; Johnny Dodds (from Louis Armstrong’s legendary Hot Five and Hot Seven line-ups) and Artie Shaw emerging as his favourite clarinettists.

At this arts boarding school, Christopher was “discovered” by a bass player named Marshall Hawkins who was working as a sports teacher. “Nobody at school knew he was a professional musician but he’d go and play gigs with whoever was in town – Joe Henderson or Eddie Harris or whoever. I had broken into a classroom to play a piano, and he found me there. I didn’t get into trouble … but he corrected some of the chord changes .. He became my first jazz mentor.”

After university, Christopher did stints in Los Angeles, New Orleans and San Antonio, Texas. He was living in New Orleans, using it as a base for tours and the occasional gig on the riverboats with the afore-mentioned Heitger, when Hurricane Katrina hit, in September 2005 – a year after that famous Edinburgh gig.

When hurricane struck, Christopher was playing at a jazz festival high in the mountains of California – and with no signal on his phone. Over the course of the weekend, his then-girlfriend (now wife) tried to contact him to say that she was going to evacuate (“No big deal – we had evacuated the summer before,” he says), and asking where his passport was and whether she should take any of his instruments with her. Unable to pick up any of these messages, Christopher only learned what had happened when he saw the news a couple of days later, just at the point when the federal levees failed. 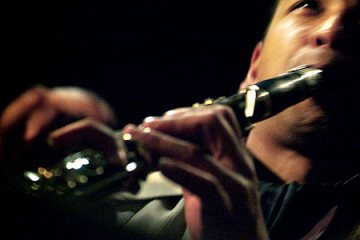 His partner was safe but their ground floor home was completely flooded – “Our area was worse than average, about eight feet of water on the street, six in the actual dwelling.” He drove his girlfriend to her parents’ home in Omaha, and he returned to his home state of California. “I set about trying to salvage my tours. I made a great effort to find other musicians and get them connected and make sure that everybody had each other’s contact information. A web designer up in New York donated some money to help me put together a website with resources for places they could get financial assistance. I hooked them up with Jazz Foundation of America if they needed instruments replaced and things like that. It was something to do.”

A month after Katrina, Christopher returned briefly to New Orleans (he only moved back full-time in 2008) to try to salvage what he could, but it was “considerably worse” than he had expected. He’s philosophical about it all. “At the end of the day, it was just an apartment-ful of crap. There are still books I go to the shelf and look for every now and then, and then I remember. There were plenty of people who lost more than I did. Imagine someone who’d actually lived there for a couple of generations..”

Has his Katrina experience changed his outlook at all? Is he less attached to stuff? “Well, I’ve never been hugely attached to anything. I didn’t appreciate losing everything though! I do get mad – I get mad when I find we have accumulated multiple items that we don’t need. Oh, I know one thing that changed – I don’t shelve wine as much any more! I pretty much buy it and drink it…”

* This piece was first published when Django a la Creole was playing the 2011 Edinburgh Jazz Festival. In autumn 2012, the band is touring Scotland, England, Wales and the Republic of Ireland. For full details, click here.

To mark the 95th anniversary of Billie Holiday’s birth – on April 7, 1915 – here she is singing Do You Know What It Means To Miss New Orleans from the 1947 movie New Orleans, a film only worth watching for the music..