The great photographer Herman Leonard died on August 14. Here’s a piece I wrote about him, when I did a phone interview with him in 2005 on the occasion of the publication of his book Jazz, Giants, and Journeys – The Photography of Herman Leonard (Scala). He was a delightful and very gracious man. 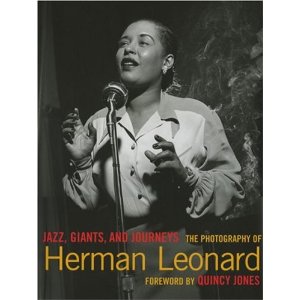 He may have lived in seven different countries, worked with the world’s most beautiful models and photographed far-flung places and people, but the constant throughout the long career of photographer Herman Leonard has been his passion for jazz. His portraits of such jazz greats as Billie Holiday and Duke Ellington are regarded as the definitive images of these stars, and his archive is a veritable Who’s Who of jazz history.

Now, at the age of 83, Leonard’s work is being celebrated in a new book, Jazz, Giants, and Journeys – The Photography of Herman Leonard. It very nearly didn’t happen, though: 10,000 of his prints were destroyed by Hurricane Katrina, and it was only because Leonard took the precaution of storing his negatives in a vault in a New Orleans museum that this unique archive survives.

For Leonard, the music came second only to the pictures: his first love was undoubtedly photography. The chatty octogenarian chortles as he recalls how his passion was initially stirred. “My older brother was interested in photography and had taken some figure studies of his wife which I came across in the tray in his little darkroom. I was eight or nine years old and had never even imagined anything like these pictures! The only nude women I’d seen were Greek statues. But I saw his photos and I thought – this is the way I gotta go…”

When Leonard set up his first studio in New York’s Greenwich Village in 1948, he was a fully-fledged jazz fan. Luckily for him, it was at a time when the scene was thriving – though there was, as he points out, “no living to be made in jazz photography.” By day, Leonard worked for magazines and shot advertising campaigns, but at night he was to be found on 52nd Street, the birthplace of bebop. “I loved the music and became enchanted with the whole atmosphere of the nightclubs,” he says. “I wanted to make a visual diary of these musical moments, just strictly for my own self.”

Leonard would trade his photos for admission into the clubs, and soon became a fixture in front of the bandstands in the Royal Roost, the Downbeat and Birdland. “I was very fortunate. The club owners let me come in in the afternoon to set my lights up.” His unforgettable, black and white photographs of the young turks of the scene – Miles Davis, Dizzy Gillespie, Charlie Parker, Dexter Gordon etc – are thrillingly evocative and undoubtedly helped jazz earn its “cool” status. Leonard was the same age as many of the musicians he was photographing, and he quickly became “one of the guys”.

Among his early work, one of his best-known photographs was a still life of the melancholy tenor saxophonist Lester Young’s sax case and iconic pork pie hat, surrounded by the swirls of cigarette smoke which were ubiquitous in Leonard’s club pictures. It’s one of Leonard’s favourite photos, because it sums up the character, and yet – incredibly – it was completely un-posed.

Another of Leonard’s early sessions was with the singer who was Young’s musical soulmate – Billie Holiday. He recalls it vividly. “The first time I worked with her was 1949 and she had just come out of jail. She was healthy and rested and off the drugs. She was charming, she was welcoming. I was with a reporter, and when we got to her modest Harlem apartment, she was wearing an apron and she’d been cooking a steak for her dog.

“The last time I photographed her was at a recording session for Norman Granz in ’55. When she walked in, she looked so terrible – haggard and drawn, just horrible – that I turned to Norman and said: ‘I can’t shoot this. You can’t use these pictures on your cover.’ He said: ‘You get your ass out there and shoot. You may not have another chance.’ Which turned out to be the case.

“I have a lot of pictures from that session that I’ll never show anybody because she just looks awful, and that isn’t the way I was brought up in photography. My mentor, Yousuf Karsh, told me:  ‘Herman, always tell the truth but in terms of beauty’. I loved Billie so much that I wouldn’t dare show these very sad pictures. But I did manage to get four or five images at that last session that I do show.”

One of these is of her shoes. “I particularly like that shot. You know, she had a tragic life – always being taken advantage of and abused by the men and so on. She lived her life in chains, and here she is in a pair of shoes with chains around her ankles. That to me is symbolic.”

Another favourite subject and singer was Ella Fitzgerald, whom Leonard photographed in the States and in Paris, where he lived for over a decade from 1956. Fitzgerald came to Paris with the producer and impresario Norman Granz (who owned Verve Records).

Leonard has very fond memories of Granz. “Norman did so much for jazz and so much for the musicians. He always did everything first class. He flew them first class, he put them in first class hotels – everything. There were occasions when he would come with black musicians and they wouldn’t be accepted, and Norman would say: ‘Either you keep us together – you don’t segregate us – or we won’t do the gig.’ ”

Just as Leonard was in the right place at the right time being in New York as bop blossomed, so he was perfectly placed in Paris for catching up with the superstars of jazz when they flew in for concerts. As often as not, it was with Leonard that they hung out at the Club St Germain after their show, or at the cosmopolitan Brasserie Lipp when they needed a late supper. The amenable photographer recalls snapping the majestic alto saxophonist Johnny Hodges there – “a sweet man” – and taking advantage of the kitchen’s late opening to dine on pastrami and coleslaw with him and other hungry American musicians.

One of Leonard’s favourite stars was Louis Armstrong. “Louis was fabulous. He was a show. He was always gagging around, having fun – just like the personality you see in his films. That’s why there’s one particular picture that I have of him which is out of the ordinary. He looks melancholy, but he was actually just thoughtful in that picture. He was backstage, and I was behind some curtains. I looked through and saw him sitting there like that so I poked my camera through and took a shot. He heard the click and he looked over at me and winked. I like that shot because it shows a different aspect of Louis.”

So who was the biggest thrill to meet? Leonard becomes very thoughtful, and his assistant suggests some names. Miles? “No, with Miles, I gravitated into his acquaintance gradually.” Louis? “No, because Louis was so open. I think it was Duke Ellington – wow, that was the biggest thrill: I was in the presence of the Duke, the elegant Ellington. He was a masterful guy and he was extremely sweet to me and accommodating. I was most impressed by that. He was hounded by everybody and you know when you hang around these big stars and you see what they have to go through, you can understand that they back away.

“For instance, I’m also, happily, a very close friend of Tony Bennett’s. I’m hanging out with him, we’re walking down the street, he has no entourage, nothing like that and people come up to him, and he stops and smiles and .. I say: ‘Doesn’t this all kind of bother you after a while?’ He says: ‘Look, these people are wonderful.. ‘ and he goes on like that. Ellington was like that too. A gentleman, a total, total gentleman.”

One of Leonard’s very favourite pictures is a rear view of Frank Sinatra. “I like it because it’s undeniably Sinatra – the body language, the feel of the smoke from the cigarette, and the simplicity of the picture. There’s nothing complicated about it, but to me it tells the story of Sinatra.

“In fact, I was taken out to his domain in Palm Springs by Quincy Jones one day, years ago. I had brought that particular print with me. I showed it to him and he hesitated and said: ‘Monte Carlo, 1958’. My jaw fell to the floor. At that point, somebody called him and he walked away. I turned to Quincy, and said: ‘How did he do that?’ . He said: ‘I don’t know, this guy is weird’. That’s a true story. He was wonderful. He was probably the one musician that I was in awe of. I didn’t engage him in long conversations as I would with the others. I just stood back there and watched and listened because I loved what he did. Sinatra was, to me, the greatest singer of all time.”

So, any regrets? Didn’t the camera sometimes get in the way of enjoying the music? “Absolutely,” nods Leonard. “People ask me: ‘What were they playing when you took that picture?’ I have no idea. I was thinking about the focusing and the angle and the exposure and all that kind of thing. I missed a lot of music because I was concentrating on the shot. But I don’t feel I missed out on the experience. The thrill of being there was enough for me.”

* Visit www.bbc.co.uk for a lovely tribute to Herman Leonard, with pictures and music.