What Bix Means to Me: Otis Ferguson 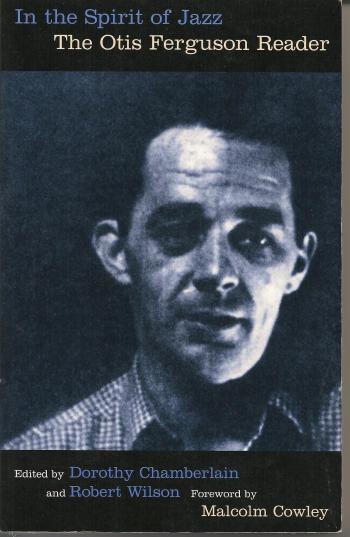 Otis Ferguson (1907-1943) was a brilliant American writer and critic who wrote for The New Republic from 1930 until his death – he was killed by a German bomb in the Gulf of Salerno. I first came across his work when I was a film student – and quoted his film essays in my dissertation on the screwball comedy. But we also share a love of jazz, and, in particular, of Bix Beiderbecke‘s music. Ferguson wrote no fewer than four essays on Bix – and his descriptions of his playing are inspired. Here are some of my favourite extracts.

“An analysis of his music as a whole would amount to a statement of the best elements in jazz …. Briefly, he played a full easy tone, no forcing, faking, or mute tricks, no glissando to cover unsure attack or vibrato to fuzz over imprecisions of pitch – it all had to be in the music. And the clear line of that music is something to wonder at…..

“Here is this fantastic chap, skipping out from behind a bank of saxophones for eight measures in the clear and back again, driving up the tension with a three-note phrase as brash and gleeful as a kid with a prank,  riding down the whole length of a chorus like a herd of mustangs – everywhere you find him there is always this miracle of constant on-the-spot invention, never faltering or repeating, every phrase as fresh and glistening as creation itself.

“Just as characteristic was the driving rhythm against which he played, the subtle and incisive timing that could make even a low and lazy figure of syncopation explode like blows in the prize ring.

“Bix Beiderbecke is to be found at his highest and best in a few of the early Goldkette and Whiteman sides (Clementine, San, etc) and especially in the small all-star outfits he and Trumbauer used to get together from larger personnels …. I could mutter and whistle the general idea of of the big full solo in Riverboat Shuffle, which was on the back of Ostrich Walk, which coupling just about represents the peak of a high and wonderful career – but why waste time with words and poor copies? One hears it, and is moved and made strangely proud; or one does not, and misses one of the fine natural resources of this American country.”

“You will know him by the little ringing shout he can get into a struck note; by the way each note seems to draw the others after it like a string of cars, giving the positive effect of speed even in his artful lags and deliberation, a sort of reckless and gay roll; and by the way, starting on the ground, he will throw a phrase straight up like a rope in the air, where it seems to hang after he has passed along, shaking gently. Above all (and this comes out best in the non-Dixieland numbers, where he remained subdued but getting the feel of it right up to the release and then putting it all in eight or 16 bars), above all there is his singing quality – over the chord and melodic structure of the tune and against the steady four-four beat, he made a little song of his own, sometimes shouting and sometimes very sweet, and often both at once …

“.. And there is exactly no-one who has kept this pure lyric quality which the best men begin to bring out only in the slow, haunting jump of the blues, in the kind of ride Bix used to take it in, on numbers with the tear and rush of an express train. To hear him is to have the feeling of being present at the original spring music comes from.

“Between Bix and whoever has the ear to listen there was none of the usual blocking effect of a set score and a difficult instrument; he simply delivered music, easy and direct. It is this intense but free personal language of his that explains such mysteries as, say, the effect of fierce open attack he gets in From Monday On – that first trumpet blast – without using the volume some can work up, and he gets it out of a horn much milder than a trumpet, at that. ..

“He taught himself ways of doing it that couldn’t have come from anyone else; for example, his trick of setting off the key note of a phrase by brushing a false – or grace – note just below it, so that he could rip up to it. An economy of emphasis, and at the same time a sharp underlining of where it falls, that leads the ear the way his phrase wants it to go. It was partly this that Hoagy Carmichael meant when he said: ‘The notes weren’t blown – they were hit, like a mallet hits a chime’; it was this that Whiteman meant when he said Bix could get more music into three notes than the whole band would get all night.”

“He ran best when he had no care for the general effect, on the Whiteman and Goldkette records where you can almost see him sitting back there and laying for the four-, eight- or 16-bar chance he’d have at that tune, when he would light a fire under it and burn a few notes of variation on its theme down to a scatter of hard and bouncing gems. He had time to sit there and think out the musical possibilities, and then a single shot at bringing them together to confound fools (Felix the Cat).

“You can hear him on a hundred records, and most of the way through the records, you can hear that he is being held back, even when the arrangement calls for trumpets. But at some point on all the records that carry his signature, you will hear him come out from behind with something that is more than noise or tone or new phrase or anything definable, something that amounts to a dedication to all and any music, and a joy in it, a joy. When, for example, the old Whiteman number of Felix the Cat is over, and the word is given to take it out, Bix lifts his horn over the band from the back row in the close studio and the whole heavy organization seems to trail after him like banners.

“…He could leave a break (as in Lazy Daddy) on two low notes dropping roundly, just with that insolence and skill of a pool shark dropping the last two balls of the rack into the far-corner pocket, or he could hold a note and tease it through the better part of a two-bar break, and just out of his go-to-hell exuberance squeeze it up another half tone to come out on the chord.

“… Even if there weren’t people around to tell you you could guess it from the music: Bix never had to reach for a note. They were all lying right there in the drawer before him.”

* All extracts from In the Spirit of Jazz – The Otis Ferguson Reader (Da Capo Press, 1997).