The concert I enjoyed most at the Edinburgh Jazz Festival was one I wasn’t reviewing for a newspaper – so, instead of taking notes, I took photos (just on my phone) of the first-ever encounter between top UK pianist Brian Kellock and two of the most regular members of the band that plays weekly at the Ear Inn in New York City – Jon-Erik Kellso (cornet) and Scott Robinson (clarinet & saxophone). They were joined by Dave Blenkhorn (guitar) and Roy Percy (bass). Scroll down beyond the slideshow for the set list …

Between the Devil and the Deep Blue Sea

I Guess I’ll Have to Change My Plans

Some of These Days

I’m Puttin’ All My Eggs in One Basket

Gee Baby Ain’t I Good To You

I Got a Right To Sing the Blues

The last night of the Norwich jazz jamboree started in what has become its traditional style: with Jim Galloway’s Sandy Brown set. One of the joys of this jazz event for me personally – and one which I always remind myself about during the hellish seven-hour train journey from Glasgow – is the chance to hear Galloway and assorted British and American stars execute with panache the very distinctive music written by the late, great Scottish clarinettist.

This was the third Sandy Brown set in as many years and, as usual, the quirky and catchy Brown originals were a delight to hear – Blues-A and Own Up proved to be the ideal tunes for getting the night’s party started. Galloway takes great care to avoid duplication of numbers played in previous years so I finally got to hear the evocative Harlem Fats and, for this outing of the Sandy Brown songbook, he also included some of the arrangements that Brown played from the musical Hair. Personally, I could listen to the Brown repertoire all night – and would have welcomed the chance to hear such previously played numbers as Go Ghana and Africa Blues again.

This year’s Sandy line-up bore a close resemblance to the 2009 version: the wonderful Rossano Sportiello again proving to be the perfect pianist for this witty music, and drummer Chuck Riggs and trombonist Ian Bateman both similarly reprising their parts. Stepping into what have been Bucky Pizzarelli’s shoes in previous years, guitarist Dave Cliff did a terrific job. Each year there has been a different trumpeter – we’ve had Jon-Erik Kellso, Randy Reinhart and this time Duke Heitger who certainly measured up to the previous incumbents despite being unfamiliar with Brown and his music. 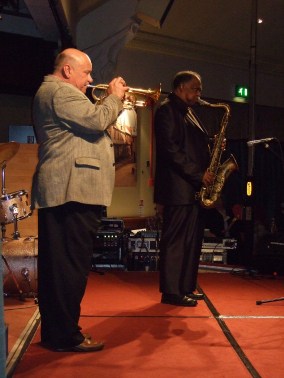 uplifting arrangements is Warren Vache. He was partnered with tenor saxophonist Houston Person for his final appearance of the Jazz Party, and it was a heavenly match, especially when it came to the set’s two ballads, Once in a While and These Foolish Things, both of which were played as lovely, relaxed duets.

And speaking of ballads, tenor saxophonist  Scott Hamilton – another great master of the genre – produced some magical moments on Monday, most memorably a dreamy take on the rarely played Spring Can Really Hang You Up the Most.

It was, however, the clarinettists – Alan Barnes, Bob Wilber, Ken Peplowski, Dan Block and Scott Robinson – who dominated the closing set of the 2011

Norwich Jazz Party. And, in a superb set, one number stood out above all others: Pee Wee’s Blues, written by Pee Wee Russell, who was described by Alan Barnes as “possibly the most technically brilliant clarinet player who ever lived”.

Not only did it boast a terrific, Pee Wee-esque solo from the great Bob Wilber but it will also be remembered for Scott Robinson’s masterstroke: by way of homage to the slightly oddball Russell sound, he hummed the first part of his solo into his horn – with wonderfully lyrical results. 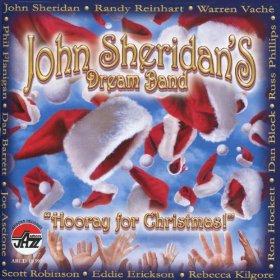 Yup, it’s an early Christmas album – and an early Christmas gift for anyone who likes to keep the music swinging through the “holiday season”. Pianist/bandleader Sheridan has compiled a lovely selection of off-the-beaten-track festive songs, several of which originate in movies set at Christmas time, and assembled a terrific band to play them. Among the individual stars in this 12-piece outfit are sunny-voiced singer Rebecca Kilgore; cornettists Warren Vache and Randy Reinhart, and clarinettist/saxophonists Dan Block and Scott Robinson.

Chet Baker: It Could Happen to You (OJC Remasters) 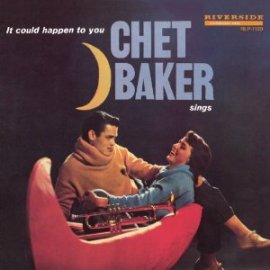 This classic 1958 album is one of my all-time favourites, and it’s just been reissued with two more alternate takes than when it last came out on CD. The great trumpeter and singer Chet Baker interprets a superb collection of songs in his unique, wistful way, showcasing a vocal style which is plaintive-sounding even on the uptempo tracks. Unlike the other Chet Baker vocal albums, this one features scatting – which sounds like trumpet solos without the horn.. Ace singer-trumpeter, ace quartet; a must for anyone interested in jazz.

Asherie is a young Israeli-born, New York-based pianist who has soaked up influence from the great Harlem stride pianists as well from the bop masters. On this beautiful solo album, he reveals the most delicate, Waller-like of touches and a lyrical style which lends itself elegantly to the 13 Manhattan-themed tracks. Highlights include the rarely heard Lovers in New York (from Breakfast at Tiffany’s) and Manhattan Serenade, a theme used on everything from the 1936 comedy My Man Godfrey to the Tom and Jerry classic Mouse in Manhattan.

Scottish alto saxophonist Stewart Forbes’s memorable duo gig with pianist David Newton at the 2009 Glasgow Jazz Festival was undoubtedly the inspiration for this CD which finds him reunited with Newton, and playing duets with four other pianists – Mira Opalinska, Alan Benzie, David Patrick and Richard Michael. Forbes’s alto is forthright and feisty-sounding and, on the two Ellington numbers, he evokes beautifully the majesty of the great Johnny Hodges. The mix of pianists and moods works well, as does a two-track switch to soprano sax.