It’s five years to the day since the great Kenny Davern died – so it seems appropriate to re-run the obit I wrote about him ..

There can be few sounds as thrilling as clarinettist Kenny Davern cutting loose with one of his characteristically passionate and exhilarating solos – as anyone who heard the American jazz star during one of his countless visits to Scotland over the last 20 years will testify. Davern, who has died suddenly at the age of 71, was widely regarded as the foremost exponent of his instrument in the world; a musician whose sound was immediately identifiable and who brought a touch of class to everything he did.

Amongst regulars at the Edinburgh and Nairn Jazz Festivals, and at the former Glasgow Society of Musicians, Davern was also known as an intimidating character who did not suffer fools gladly, and who reserved his greatest contempt for anyone who tried to make him play in front of a microphone. Woe betide any sound engineer who hadn’t been alerted to Davern’s strongly held views on acoustics. Similarly, festival organisers were known to vanish mysteriously when Davern went on the attack – and he never let anything like an audience get in the way of a rant. Indeed, he often treated his listeners with derision too: one trick was to ask for requests and then shoot them down with an acerbic comment.

However, the cantankerous clarinettist was a part he enjoyed playing. It wasn’t the whole story. The intimidating Davern was my first-ever interviewee. Forty-five minutes into the nerve-wracking session, the significance of the fact that the wheels on my borrowed tape recorder weren’t turning dawned on both of us: I had forgotten to lift the pause button. After a terrifying five minutes, during which I was ready to jack in journalism, the unthinkable happened: he softened. At 11.30pm, as I tried to make a break for the door, he insisted on 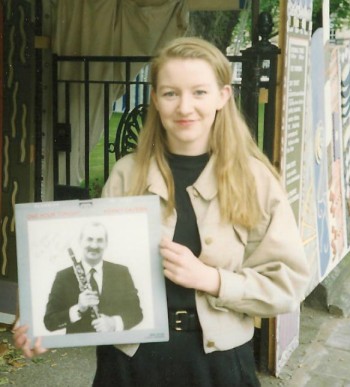 starting the interview again. Not only did the second version turn out better than the original, but, years later, I learned that Davern was dining out, among mutual musician friends, on the story – telling them that he had launched me on my career in journalism.

The soft centre shouldn’t have been so unexpected. Davern was a player of great warmth and passion. He routinely sent shivers down the spine and made hair stand on end when he broke out of his hitherto controlled solos and let rip. There was absolutely nothing like it when he soloed, exploding unexpectedly into the upper register and then swooping back down again. Playing ballads or blues tunes, he had a seductive style, coaxing the sound from the horn the way a snake charmer would draw the reptile from a basket. His playing embraced extreme musical characteristics in the same manner as his personality was, by turn, intimidating and charming. His sound was sweet, fluid and polished one minute; thrillingly spiky, raw and plaintive the next. It is impossible to think of his signature songs – especially Sweet Lorraine – without hearing him playing them.

Born in Huntington, New York, the self-taught Davern began his jazz career at the age of 16. He played with many older greats, including Jack Teagarden, and despite flirting with avant-garde jazz during the 1950s, his primary influence was always Louis Armstrong. In the 1970s, he and fellow clarinettist/saxophonist Bob Wilber formed the super-group Soprano Summit. Davern then formed The Blue Three with pianist Dick Wellstood, before operating as a touring soloist after Wellstood’s death. He leaves an impressive, though not vast, legacy of recordings, and told me in that initial interview: “Just to record for the sake of being in a studio is masturbatory.” He is survived by his wife, Elsa, his two step-children and four step-grandchildren.